While my Gen8 Microserver running FreeNAS has been perfect with the original Celeron G1610T, the one running Proxmox was another story.

It’s not really surprising that once I reached 5 or 6 virtual machines the dual core G1610T was a bit out of it’s depth.

This resulted in some very poor performance across the board, especially when I started to throw some demanding tasks at it.

After some reading I found a very informative post on the homeservershow forums about the potential CPU upgrade options for the Gen8 Microserver.

The limiting factor is that the heatsink is only rated to approximately 35W TDP although it is possible to stretch this a little.

The recommended options were as follows:

After quite a lot of research I started looking for one, then any of these but after several months of checking ebay they were all hard to find and very overpriced.

For a while I gave up on the idea and started looking at replacing the Gen8 altogether. It was then I stumbled across a forum post where someone had tried using a non Xeon processor with great success.

While the Celeron G1610T, Pentium G2020T and Xeon options all support ECC memory, other Intel processors do not (officially).

I found that I had an older i3-2120 in a drawer from an abandoned media center project and thought it was worth a shot. While the processor at 65W TDP was well above the 35W TDP limit of the heatsink, people were having success with the Xeon E3-1230 v2 at 69W so I decided to risk it.

The specification of the i3-2120 is as follows:

More importantly it had Intel Virtualization Technology (VT-x) support and while Intel VT-d was not supported I currently have no use for it anyway.

I put the new CPU in place, used a sensible amount of thermal paste, screwed the heatsink down and tried powering it on and surprisingly it worked!

I booted the server up, made sure the virtual machines were all started and began testing.

Although not amazingly fast the i3-2120 certainly coped far better than the Celeron G1610T.

Under normal use the i3 runs Proxmox and my VM’s very well: 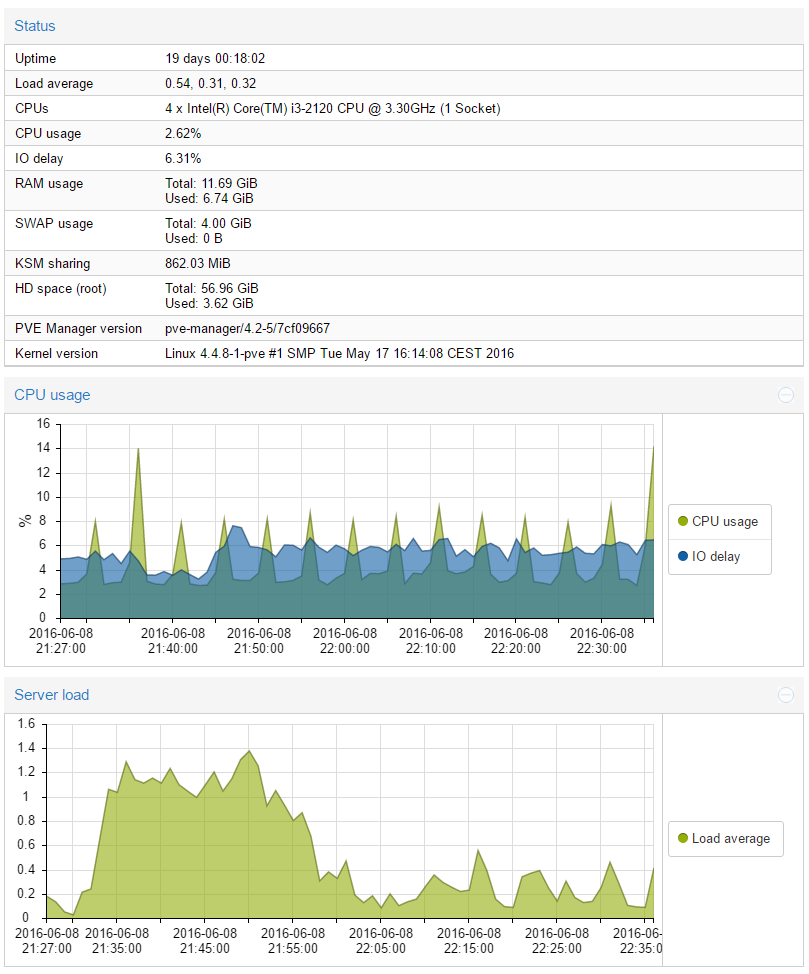 HP iLo also shows impressive results for the temperatures especially considering that the ambient temperature when taking this screenshot was over 20C:

And finally, for those concerned about ECC memory, it appears to work perfectly under this CPU:

To conclude, if you’re planning on upgrading your Gen8 CPU I would highly recommend you look for one of the Xeon models with a lower TDP. However, if like me you have an FCLGA1155 socket i3 on hand with a TDP lower than 69W it may be worth a try!

Additionally I will almost certainly need to replace the Gen8 Microserver with something more powerful in the future, even if only for the ability to add more DIMMs. However, for the time being it’s certainly doing the job.