For quite some time I’ve been wanting some sort of virtualisation at home. Mainly so that I could run several servers and spin new ones up for testing without paying for a ton of hardware and the hefty power bill that comes with it. Although I already had the N40L, being VERY reasonably priced and with the addition of cashback, the Gen8 Microserver was too good to pass up. 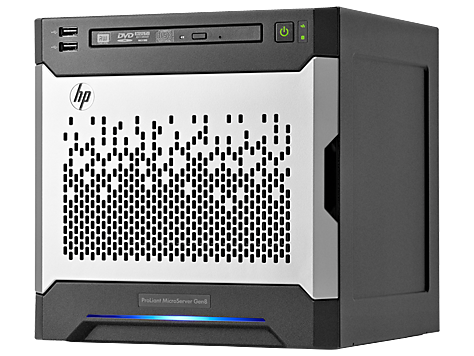 Apart from simply looking far better than the N40L, the Gen8 comes with several improvements. I won’t bore you by going through each of them in turn as there are already a slew of articles about the Gen8. The feature that really sold it for me was the inclusion of iLo4 for remote management.

Hardware wise, I already had the 250GB drive from the N40L which I moved into the Gen8 along with a spare 500GB drive. I also added a second 2GB stick of ECC ram stolen from the N40L bringing the total to 4GB. I was hoping to be able to use some spare DDR3 but unfortunately the Gen8 only accepts ECC UDIMMs and so until I get around to buying more I’ll have to stick to 4GB and be conservative with what I run on it.

At this point I had a server but I really hadn’t decided what hypervisor I was going to run on it. I considered the well known options, Vmware Esxi, Hyper-V and Xen and I also considered setting up KVM and QEMU. In the end I found Proxmox.

While Proxmox is not terribly well known I have found it to be exactly what I wanted. It has several features that alternatives do not, such as a built in backup utility. You can read about all the features here.

I installed it on the 250GB disk and the installation couldn’t have been simpler. To add the second physical disk for storage I logged into the server console through iLo, formatted the second disk as ext4 and made the required entry in fstab to mount it in my usual location: /disks/disk0.

I have been keeping iso’s on the installation (local) disk, the VM’s on the 500GB disk (added as a directory in Proxmox) and backups on an NFS share (details to come).

I have now been running this setup since April and it has been suprisingly useful. As the virtual machines are all Archlinux I have been able to keep them lean and am currently only using half of the RAM which at first I thought would never be enough.

Details regarding the virtual machines will be coming shortly in future posts so stay tuned.