With my two new servers prepared I set about installing the latest version of Proxmox 5.4. I did the installation via the iDrac console over the network and it was very nice to be able to install the OS from my desk without needing to bother with pulling out a screen, keyboard and mouse.

The installation of Proxmox is very straight forward and although it did not allow me to configure my desired network configuration during the installation it does allow for various storage options.

I chose to install Proxmox with a ZFS pool of Mirrors (labelled as ZFS RAID 10) which creates two partitions on the first Mirror, the second for ZFS and the first for the boot partition.

The Proxmox wiki is very comprehensive and I do recommend reading it before starting as there are a number of things to consider when deploying a hypervisor.

One of the first things I needed to do on each freshly installed host was to configure LACP.

Personally I prefer to use OpenVSwitch for this and installed it as follows: apt -y install openvswitch-switch

My OVS configuration is similar to the following:

On my HP v1910-48G I have the following configured (as an example for a single node):

With the networking configured I proceeded to configure the update repositories, update the servers and install my usual utilities:

Being Dell servers I wanted the Dell OMSA features available to me.

The documentation for this isn’t fantastic but I achieved this as follows:

It’s certainly not a requirement, however I quite like being able to see the system information in a web browser.

The newer versions of Proxmox make the configuration of a cluster very simple and everything can be done in the web UI.

Under “Datacenter -> Cluster” a new cluster can be defined with “Create Cluster”.

Once complete, the second node can be joined in the same location using the join information.

Everything else is taken care of and at this point I had a functioning two node cluster.

One of the newer features in Proxmox is support for a Corosync QDevice. A long outstanding issue with running two node Proxmox clusters is that in the event of a vote, it is possible for there to be a tie.

Older versions of Proxmox got around this issue by using a quorum disk which required a lot of configuration and in my experience wasn’t overly reliable.

This can cause multiple issues and while it would be possible to add a third Proxmox server without any VMs or Containers, simply to prevent this situation it is rather overkill.

A QDevice is simply a lightweight process running on another separate server or virtual machine that adds a vote to one of the nodes so that in the event of a vote the is no tie.

I created a small virtual machine on my FreeNAS server for this with 1 CPU and 512MB of RAM.

Having previous experience with using qnetd with Proxmox I also copied the public root ssh keys from my proxmox hosts (/root/.ssh/id_rsa.pub) to `/root/.ssh/authorized_keys on the QDevice server. This allows the Proxmox servers to ssh into the QDevice server without needing to enable password based root ssh logins.

Each node in the Proxmox server then needed the QDevice package which can be installed as follows: apt -y install corosync-qdevice. With each node prepared I added the QDevice as follows: pvecm qdevice setup 10.0.30.10 where the specified IP address is the IP of the QDevice server.

There is some output of this command which I failed to capture but it should be very obvious if anything went wrong.

I was then able to verify that my QDevice was in use and that my cluster had quorum as follows: 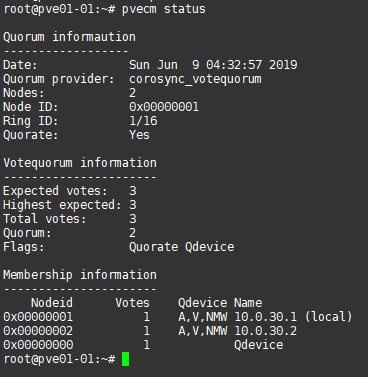 At this point I have a fully functional two node Proxmox cluster running the vast majority of my virtual machines and containers. 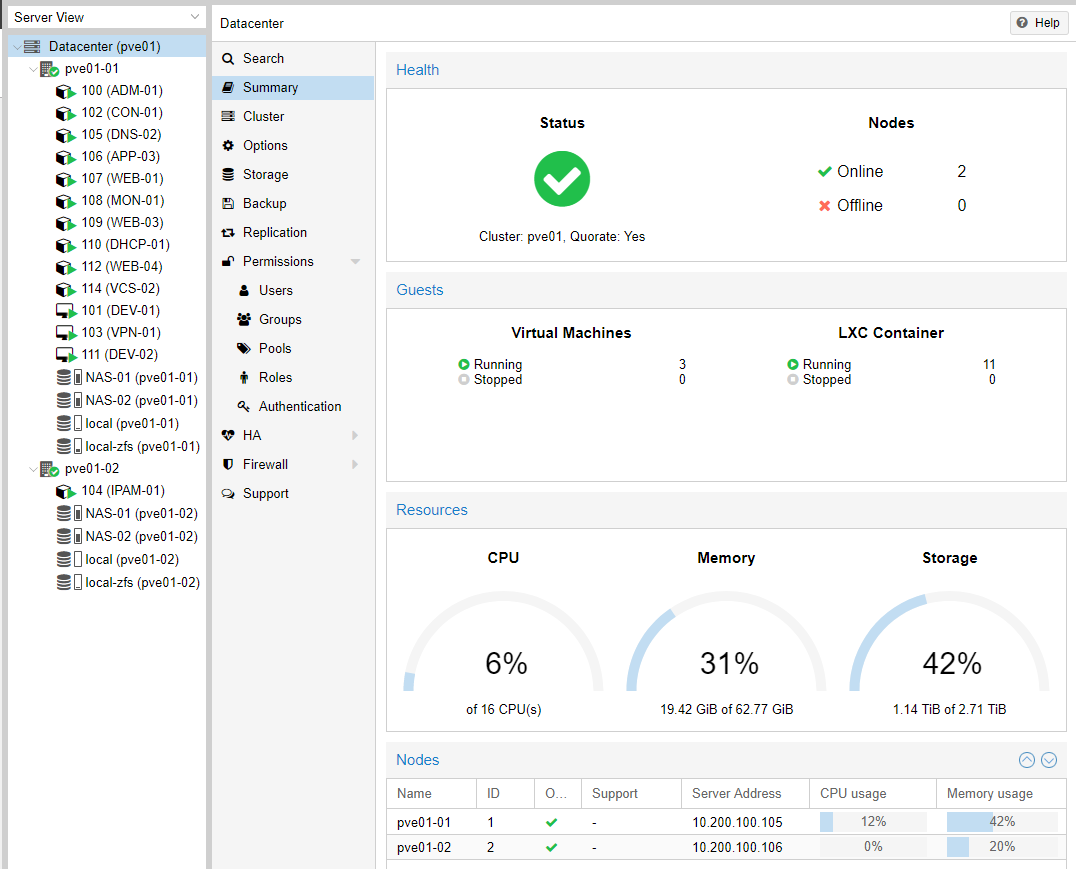 I finished things off by copying the distro script from my LibreNMS server, installing and configurating snmpd and adding the servers to my LibreNMS monitoring. However this post is already rather long and that would be getting quite out of scope to go into in detail.

I did mention that I am still running my HP Microservers and this is due to a couple of VM’s having quite different storage requirements. At some point later in the year I plan to add a third node to this new cluster which will be based on different hardware, specifically to fulfil these requirements. More on that in a later post.