Over the years I’ve used a lot of terminal emulators. I finally settled on rxvt-unicode (urxvt) and was happy with it for quite some time. However, configuration was a pain and after encountering several issues with font rendering I finally decided to look for something better.

As I primarily use a tiling window manager I wanted something that was designed for use without a mouse.

Termite is a very minimal terminal emulator, primarily designed to be used with tiling window managers. It’s also modal like vim, having both an insert and a command mode in which keybindings have different functions, for instance ctrl-shift-x will enter a url hints mode similar to vimperator’s follow function in firefox, allowing you to open a url displayed in a terminal window without the need to use a mouse.

Configuration was also reasonably simple to do. Termite can read it’s configuration from various locations but for the sake of consistency I used ~/.config/termite/config . For configuration options see: man termite.config .

My initial configuration is as follows:

Now at this point I had a nice, functional terminal. However what would be the point without a little rice. In the past I’ve written color schemes by hand from a color palette. However I recently came across terminal.sexy which provides a very nice webgui for creating terminal color schemes and can export them in a variety of formats for different terminal emulators, including termite.

Here is my current color scheme:

And of course, what would be the point without a screenshot: 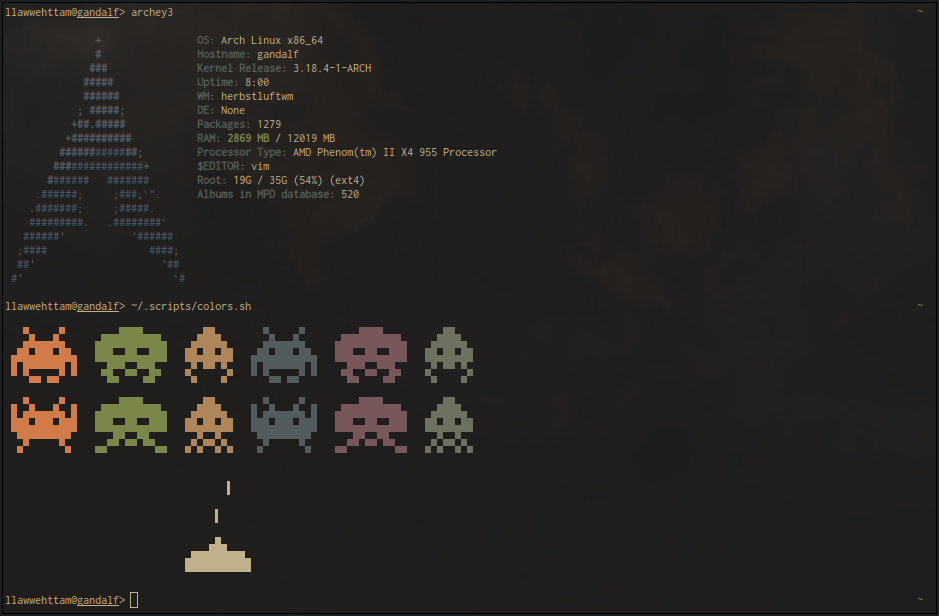 The latest versions of my configs are usually available from my dotfiles repository on github.